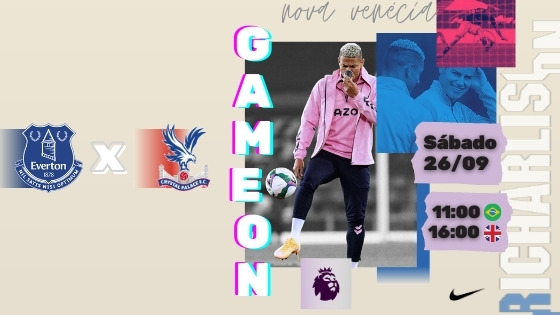 With Richarlison on the rise, Everton seeks to break 82-year mark

Everton will face Crystal Palace this Saturday at 11 am at Selhurst Park Stadium in London. The blue team started the new season with favourable numbers: four wins in a row - two by the Premier League and two by the English League Cup. The Toffees have not had such a remarkable start since the 1978/79 season when they have also won four matches in a row.

If they win tomorrow, Carlo Ancelotti's men can match a historic and relevant milepost for the club. The last time Everton opened the season by winning five in a row was 82 years ago (1938/1939) when they won the fifth of their nine English titles. And such a start has only happened four times in the history of the Merseyside team. Finally, in the event of a win, it will also equal the best start of the Premier League era, which is 1992/1993 (three wins in a row).

The team comes from two amazing 5-2 wins and very consistent performances by Richarlison. The striker scored for the first time this season in last Wednesday's game, against Fleetwood City, but he was already having great performances against West Bromwich - when he had direct involvement in the team's four goals - and against Tottenham.

As to Saturday's opponent, the player has a good record: 2 wins, 3 draws and 1 loss, with a goal scored in the last duel, in February this year (3-1 win). Rick has never lost a match against the Eagles in his Everton's shirt.

Crystal Palace is also in a good phase. They won the first two in the national league, against Manchester United and Southampton, and won the English League Cup standings on penalties, after a draw in normal time with Bournemouth.

Richarlison in the Premier League