In the under-20 team, we tried to qualify, but we failed. I was sad because we wanted to go to the World Cup. We didn't succeed. It was a lesson for me and the other players. The lesson that remains is that in football you cannot afford to not be on point. Unfortunately, there were three games where we could have won, but we didn't. It happens. There were times where we should have aimed for the goal, but decided not to. Even so, I evolved a lot and got some extra experience.

I was in bad shape, but I wouldn't surrender. 2016 was a tough year. My performance was far from ideal, but when I got back  from the national team, Abel let me play. I hadn't met him before. When we met, he asked if I wanted to play. I said yes, I scored two goals in our match against Volta Redonda. I had never scored twice in a professional match. Abel liked me and we started to get on well.

I didn't want to lose space on the team. So I decided to shorten my holidays (I had only 2 days), and I trained the rest of the time. It paid off, I had a beautiful Championship in Rio and a great start to the Brasileirão. Abel was very important. I have him as a second father. When he kissed my head, he reminded me of my father, as when I played he used to kiss my head like that too.

We started getting a few bids. Ajax and Porto. But Marcos Silva went to Brazil to talk to me in person. He told me that he needed me, that he  believed my potential and that I could play in the three positions at the front, open at the ends or inside. I realised that Watford was really interested in having me and I didn't think twice. The Premier League had always been a dream.

In the beginning, I struggled with the weather. When I arrived temperatures were around -5. I was used to Rio de Janeiro, where it's 40 degrees all the time. It was a bit difficult but it is what it is, I had to adapt as quickly as possible. The language was also complicated. I understood more than I could speak. In the beginning, I couldn't have an interview in English, for instance. I started taking classes twice a week and I felt like things were getting better.

Marcos Silva helped me a lot. He is a very organized coach and demands a lot from the players, which is good. He was always in the field showing us how to do things. And when we needed to clarify something, he was always happy to have us in is office. I had no doubt he would soon become one of the greatest coaches in Europe. He helped me play well and I wanted to thank him, by delivering what I was expected from him, to the club and to my teammates.

At Watford, our mental heath was as important as our physical heath. They wanted to make sure we were happy in order to perform well. They looked after their new athletes very well. I was playing in a wonderful club and developed a huge affection for Watford. I went there aiming to play. I say this because in a bigger club I would probably play less games or even be loaned. At Watford, I could play.

At Watford, there was also Gomes, who is like a brother to me. He helped me a lot to adapt. Gomes told me that Elton John always goes to the games, that he likes to watch the players. I was looking forward to meeting him very soon. I wanted to give him a hug.

When I arrived in the Premier League, I started to dream bigger and I was looking forward to being called up by Tite. I want to play in a World Cup and I had to be focused, because I knew that they were always watching us.

I nearly cried when I scored my first goal against Bournemouth, in the second round of the Premier League. It was very exciting, that moment stayed in my head for days. My second goal against West Bromwich tied the game at the very last minute. I took off my shirt. Troy Deeney told me later in the day that I could be fined for that. Ah well, okay, it was worth it.

I was used to playing in these stadiums only on my video game. It was very surreal to be at Wembley, at Old Trafford ... a dream.

On the pitch, the game was much more intense. The defenders were always there, and if you thought too much, the opponents would run over you. They sought physical contact a lot, so I started to take advantage of it. The distance from the crowd to the pitch is also very small. And as the stadiums are always full, there is a lot of pressure!

And I really liked that. 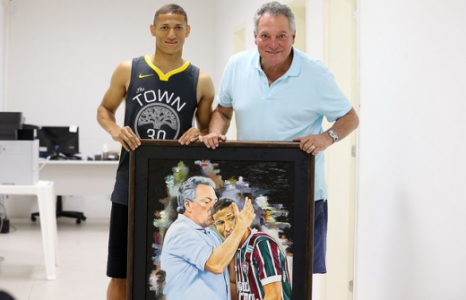